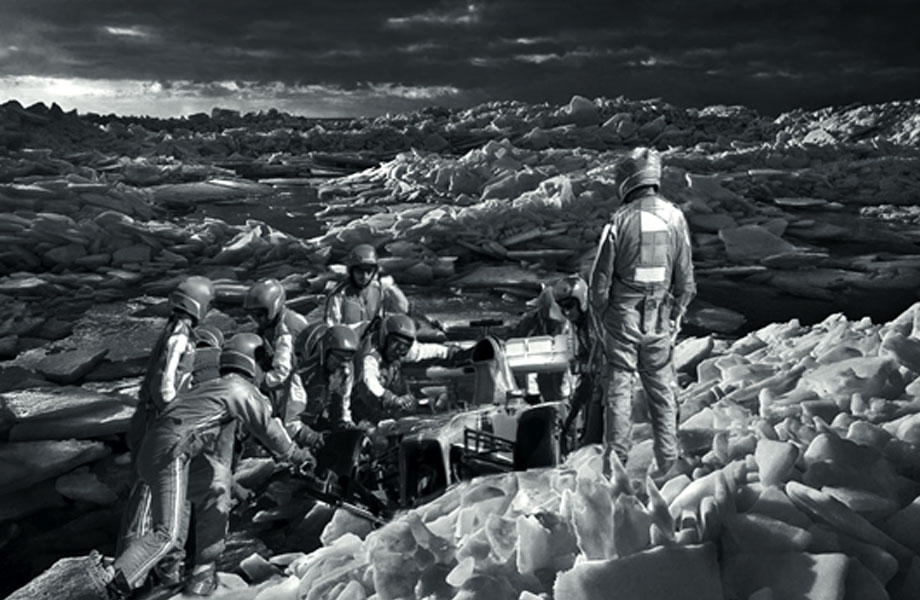 LIMINALITY AND THE BECOMING OF THE MARVELLOUS

The luminous portal as simile presents the threshold to the liminal space of becoming. In the present exhibition it is elevated and placed high on the wall of the gallery, it offers as entry the key of imagination. Such doorway entrances have long been established as creative gateways into the imagined and the marvellous. The painter Magritte, perhaps, more than most, sought the daily mystère of imaginary portals, as evidenced in his numerous paintings that depict doorway openings of passage.[1] The liminal (threshold becoming) imagined aspects of life are central to the essence of the marvellous, just as readily as they present avenues of passage to an understanding of our libidinal nature—that is to say the psychological economies that fuel all the different aspects of desire. A position long ago vindicated by Duchamp’s L’Étant Données (1946-66), and witnessed by numerous other door examples that have been subsequently realised.[2] But nonetheless the origins of the marvellous lie embedded in Romantic affection as a doorway or mental passage into an imagined journey, just as the literary Gothic and idiomatic expression ‘at death’s door’ represents a commonplace and paranormal simile-cum-expression as to the afterlife…a door to the imagined life beyond.

“…there is a love for the marvellous, a belief in the marvellous, intertwined in all my projects, which hurries me out of the common pathways of men, even to the wild sea and unvisited regions I am about to explore.”

A painter’s love of the marvellous and the unpredictable and bewildered states of wonder that follow from it, might be considered the informing aspects that bring together the meticulous process and the imagined outcomes in the paintings of Christoph Steinmeyer. Like the discursive revelations of les vases communicants (communicating vessels), the imagination and the processes of a painting’s realised execution flow into each other through a state of distanced and continuous reverie.[3] Yet if the first principle of the marvellous is that of wonder, then it becomes clear that creative states of wonder are both an act of interrogation (“I wonder why…?”) and an exclamation (“What a wonder!”).[4] Each is fully embraced within the bounds of intellectual curiosity, since as a feeling of visual puzzlement flows from the first and a sense of affective pleasure and amazement are immediately born of the second. The recent paintings Das Dokument (The Document, 2014), and Das Rennen (The Race, 2015) by Steinmeyer make the point self-evident in the bringing together of distant if not to say at times puzzling realities.[5] However, the continuous wonder of the marvellous is therefore something quite distinct from conventional notions of the uncanny, as the latter usually creates a state of fear or anxiety and uncertainty, whereas wonder remains ever speculative and open ended. If we look at the painting Das Dokument we are struck by the wondrous fact that a convergence of time, space, and environment, has evoked a sense of imaginative allusion. An ocean liner mariner (the two stripes suggest a second officer) surveys the horizon diagonally from the foreground left with a view to taking a possible photograph. While at the mid-ground a traditional sailing schooner is perched on top of a mountain and heaves towards the officer. Both the ship and mountain breach the clouds creating a disconcerting sense of pictorial reversal, consequently sea becomes air and wave becomes sky, as an apparent cloud-wave rolls from the rear ground towards the protagonist elements. We are confronted with something of a visual conundrum of arrested movement and the displaced phenomena of land, sea, air and water. The painting has been executed as a semi-grisaille that nears black and white, a metaphor echoed, perhaps, by the mariner-officer holding up the camera to take an imaginary photograph. Yet while clearly figurative the painting is neither photorealism nor an anamorphic example of distorted surrealism, since it hovers in suspension (in a double sense) between the logical and the psychological, between the fanciful and the real. In short the painting is an image of open wonder, a unique and special thing in the world “The experience of wonder depends at first on the uniqueness of the object. As Spinoza said, it reminds us of nothing and we are left to think only of it.”[6] This said we might still be tempted to impose an iconography of retrospect, as with Steinmeyer’s reference (intended or otherwise) to Caspar David Friedrich’s ‘Der Mönch am Meer’ (The Monk and the Sea, 1808-10): a work very familiar to the artist in the Alte National Galerie here in Berlin.[7]

The frisson of the marvellous that is expressed as a form of wonder is no less apparent in the grisaille Das Rennen, where a Formula Racing car driver and pit-crew are shown isolated in a glacial arctic setting. In this case it is the unexpected perversity of a racing car and not a seagoing ship that appears as if trapped in the ice.[8] But while there may again be an askance reference to the painter Friedrich, it is the visual in extremis of the pictorial contents and their respective distant realities that are most powerfully manifested. The title is by its nature intentionally paradoxical, since the arrested reality and the environment have little to do with the context of a car race. Rather the visual focus is on the robotic nature of the wheel change and car repairs of the pit crew, immersed in a bleak and glacial landscape, with the ice pack exaggeratedly expressed in terms of its fractured break up. The driver like the mariner in Das Dokument looks onto the events from an elevated position using again another historical pictorial trope traditionally associated with Romantic viewpoints (from either above or below), yet any inference of the conventional sublime has been replaced by querulous enquiry, “Wonder binds the mind to a visual experience that has called attention to itself by its beauty, its strangeness, and its order,” and “What is strange occurs only against the backdrop of some concrete version of the ordinary.[9] For these reasons it is the aesthetic of the marvellous expressed through predominant visual wonder that characterise Das Dokument and Das Rennen, paintings of meticulous execution that still retain a fresh and open ended sense of individual and investigative visual enquiry.